I’m not saying that I’m Mr. Fun or anything, but I like a good time. Well, a good quiet time, but my point is that I’m not exactly a dark and brooding personality — most of the time. I like happiness; I’m certainly not anti-joy. And yet there are some topics that, whenever they come up, make me sound like the biggest, baddest grump on the planet.

For whatever reason, mathematically speaking, it’s whimsy. I hate whimsy. It drives me up the wall.

Maybe you know what I mean. Mathematical whim is when the ultimate justification for some mathematical pursuit is a version of ‘because mathematicians — we’re just some wiiiiild and cra-zay guys!’

Mathematical whim is when you invent a new number because you can. It’s when you extend something beyond the point of reason, because why not? It’s when you sort of suggest that once you enter Math Club you’re powerful and in charge and nothing, not even reason itself, can keep you from playing this meaningless, arbitrary game with yourself…

…and there I go again, turning into Oscar the Grouch, but for real this whole thing irrationally bugs me.

The first time mathematical whim really bugged me was when I came to dislike the way math teachers typically introduce imaginary numbers. The common pedagogical move is to point to previously unsolvable equations and suggest that we invent a solution. So, up until now we haven’t had a solution to

“Oh my god, math teacher, can you actually do that? What is this? I didn’t realize doing math was so cool that you could just do whatever you want whenever you want?”

Five reasons why I dislike this exercise in mathematical whimsy:

In the case of imaginary numbers, this made me upset enough that I spent a lot of time trying to put together materials that expressed a different introductory vision of what these things are. And I think that non-Euclidean geometries are similarly misunderstood and mispresented to students.

And the whole thing makes me feel grumpy, and like I’m no fun at all.

This thought recently came up as I’ve been studying p-adic number theory with a colleague, because this is an area of math that it is very easy to present whimsically.

Here’s a whimsical presentation: Hey, you know how we normally find the distance between two points? You know, directly, like this: 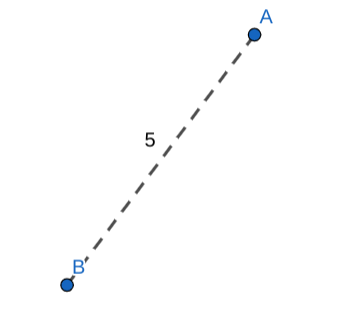 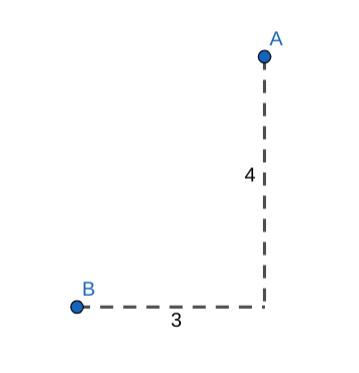 And so that sets us out on a quest to clarify what it really means to be a measure of distance, and to search for alternate ways to satisfy those conditions.

Via wikipedia, here is what those conditions might be:

In other words, distance should not be negative, your distance is only 0 to yourself, for distance the order of your points doesn’t matter, and the “direct” route can’t be longer than the “indirect” route that takes a stop at some other point along the way.

But…wait. Both the taxicab metric and the conventional (“Euclidean”) metric are defined using the absolute value function.

The taxicab metric measures the distance between two points

The conventional way of measuring distance pythagorizes the taxicab terms:

WHIMSY TIME: WHAT IF THE ABSOLUTE VALUE WAS ENTIRELY DIFFERENT???

So, let’s do it again: let’s figure out the core qualities of what makes something an “absolute value” and then try to find weirdo, alien-planet absolute values that fit the axioms but differ from our own normy absolute value.

Here we go again, from wikipedia, here’s what it means to be an absolute value:

And now we tell our students — or, in this case, me, since I’m the student here — that this is what p-adic numbers are. They are the answer to this particular call of whim, a response to the desire to explore alternate worlds and possibilities.

P-adic distance is the distance you get when you’re using these alternate absolute values. The numbers that you create, when using these alternate ways of measuring distance, are analogous to the Real numbers (Real numbers are created with conventional aka boring absolute value), but they are awesomer: they are the p-adic numbers (the p-adic completion of the rationals).

Now what is true is that there are some VERY cool things that you can do with this wider perspective on absolute values. They really do operate like a whole family of related functions. And there is a terribly stunning theorem that says that there are only two kinds of absolute values: the familiar one, and the p-adic ones.

So all of that is cool, but it still left me unhappy. Where does this idea of what it means to be an absolute value come from? Why would anyone care about this?

And what’s especially frustrating is that I’m just not there yet. I’m in the middle of learning about all these things. I went back to some of the papers introducing p-adic numbers towards the end of the 19th century, and I wasn’t able to connect the dots between their concerns with algebraic numbers and what I’ve been reading in my text. And there’s no reason to think that I will be able to understand any of it until I persist a bit further in my learning.

Which leads me to a troubling thought: what if mathematical whimsy is a useful lie? What if it’s a shot of instant-motivation that’s necessary to get students over that initial hump? What if it’s the sort of thing that makes itself useless in time, a ladder that a successful student will throw away once they’ve reached a higher point of vantage?

Nah, forget that. And forget whimsy too. Someone should be able to tell me why we’d bother creating these alternate p-adic absolute values in a way that makes sense.