Tina wants to start talking about diversity at TMC (the conference), so here’s a quick thought in that direction:

Would you rather travel to a foreign country alone, or with a group of friends?

One way of thinking about diversity — not a great way, I think — is about being welcoming to minorities. The problem with this is that it’s never comfortable to be the minority in that position. It doesn’t matter how warm or welcoming the majority is, especially when we’re talking in particular about race. There is loneliness and discomfort that’s inherent to that kind of “inclusion.”

I am not a person of color, so I can’t speak directly to that. But the loneliness is a feeling that’s somewhat familiar to me from walking around new cities with my yarmulke on, trying to keep Shabbat in the middle of a big edu gathering, and (especially) from trying to find kosher food at these conferences.

From my conversations with Marian and others, this loneliness is a common experience for educators of color. It’s a powerful force that functions to exclude entire groups from spaces, even if a community is really, really trying to be welcoming to them. This is one reason why, so far, people of color are so scarce in many math edu gatherings.

There is another way to think of diversity, though, and it has to do with creating spaces that aren’t dominated by the majority. In particular, it’s about creating opportunities for people of color to gather together and travel through white educational spaces.

One group that I think has learned this lesson — about the difference between the first and second kinds of diversity — is Heinemann, the education publisher. They have a two-year fellowship for educators to write and think about their work. I was a member of their first cohort, from 2014 to 2016.

The first cohort looked like a lot of diversity-minded groups in education. Which is to say, though we were “diverse” in many ways, there was not a cadre of people of color amidst the whiteness. I’m not privy to the decision-making of the Heinemann folks, but they’ve clearly made a conscious choice to go in a different direction in the fellowship. Here is a picture of the 2nd cohort (see Kent, top right): Here is a picture of their third cohort (see Marian, center right): 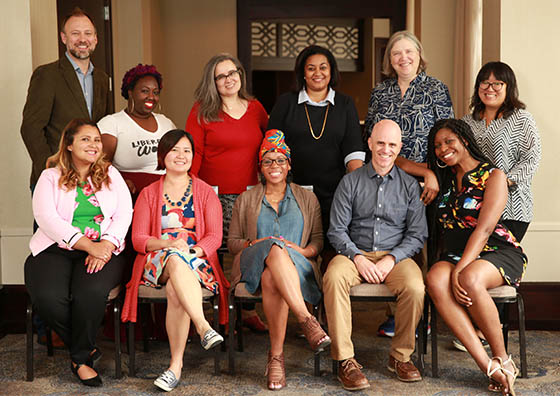 Heinemann now sees it as a priority to invite a contingent of educators of color into their fellowship.

This is not to suggest, by the way, that any of the members of color in these groups are otherwise under-qualified for the fellowship. Heinemann gets hundreds of applicants for the handful of spots they have to offer. At a certain point of quality, how do you even choose between two excellent applications? The folks running things get to choose which over-qualified applicants make the cut and which don’t — they just do it in a way that battles isolation for people of color.

Spaces like this simply don’t exist in math education. There is no mainstream math edu group that intentionally cultivates “diversity” in this way, TMC included.

It seems, from what I’ve heard, that Heinemann’s approach worked. “The Need For and Needs of Teachers of Color” is a podcast episode where the second cohort’s “fellows of color” discussed what the fellowship has meant for them.

The loneliness of being the only educator of color comes up. Here it is, as described by Tricia:

I’m only one of handful of teachers of color in my entire district. A student once asked me, “how many teachers of color are there?” I’m like, “that’s a good question.” And we never see each other. We never speak to one another. Issues that teachers of color face in particular are never addressed, so power works by isolating.

The flipside of this, though, is that bringing together a group that breaks down that isolation can be extremely empowering to its members. It can help arm educators of color to go further into elite educational spaces, places that otherwise could be dominated by that loneliness.

One of my favorite parts of the podcast is when Anna describes how she considered dropping out of a doctoral program. It was her friends of color from the fellowship who gave her the encouragement to continue traveling in a space that might otherwise be uncomfortable to pass through:

So I started a doc program…and I sat down and I thought today’s the day I’m going to quit. And Kim texted me and she said, “Anna, don’t quit. We need you.” And not quit teaching, but quit the program and so that really made a difference, and being able to know that there are people who are going to tell us, “don’t quit” is just so important.

I’m sure the doctoral program wanted to make their space comfortable for all. But there are limits to that approach. The second approach to diversity is different. It’s less like offering someone your couch for a weekend, and more like offering your home for a friend and their family.

I don’t know who exactly I’m calling to action in this post, because I don’t know where there are opportunities to do things like this in math education. (Concretely, I’m not sure who would fund something precisely like the Heinemann fellowship, but for math educators.) I’m not sure if this could be the initiative of a yearly conference, of a rambling online community, or maybe it could be done by a company or one of the professional organizations. I don’t know.

But I do think that if we think about the loneliness that’s inherent in crossing into majority spaces, we’ll do a better job thinking of ways to do better. And one tool could be the intentional creation of spaces for math educators of color, within these larger gatherings.