If you give a quiz covering lots of different topics, you’re going to get a lot of different mistakes. Which leaves you with a dilemma: how do you address those mistakes?

Yesterday’s quiz in geometry was a review quiz, so the topics were from all over the place:

As expected, kids distributed their not-quite-there work fairly evenly across these topics. (OK so that’s not true, there were a lot of issues with the congruence proofs. There always are and always will be. Sigh.)

Here were two bad options for returning the quiz:

The second of the two options is great when there the mistakes are in the same galaxy. (I wrote about this in a post, Feedbackless Feedback.) But, I’m realizing now, this isn’t a terrific move when the mistakes are distributed across many topics. Because on what basis should I pick something to focus on reteaching? Any choice would be equally bad.

While reviewing the class’ quizzes, I found myself falling into written comments, at least until I figured out what else to do with the quizzes.

I used to write long, wordy comments that were essentially hints on the margins of the page. (“Great start! Have you tried multiplying both sides of the equation by 3?”) I came to dislike those sort of comments, as they just focus focus focus attention all on THIS problem. But I don’t particularly care about whether a students gets this problem correct; I care about the generalization.

What I’ve fallen into is, whenever possible, writing a quick example that’s related (but not identical) to the trouble-problem (the problem-problem) on the page. I do this below on the second question:

Then, I ask kids to revise the original on the basis of the example (or anything else they realized).

After writing a few of these example-comments, I realized I was taking a lot of time doing this, and repeating myself somewhat. I also realized that I don’t know if I could repeat this on every page for the congruence proofs, as the problem itself was reasonably complex:

I wasn’t sure what to do. Then, I remembered something I had read from Dylan Wiliam — I think it’s in Embedded Formative Assessment. His idea there was that you can give all the class’ comments to everyone, and then kids have to decide which comments apply to them.

I thought, OK, I can work with this. So I quickly (quickly!) made a page of examples, one for every mistake I saw on the quiz: 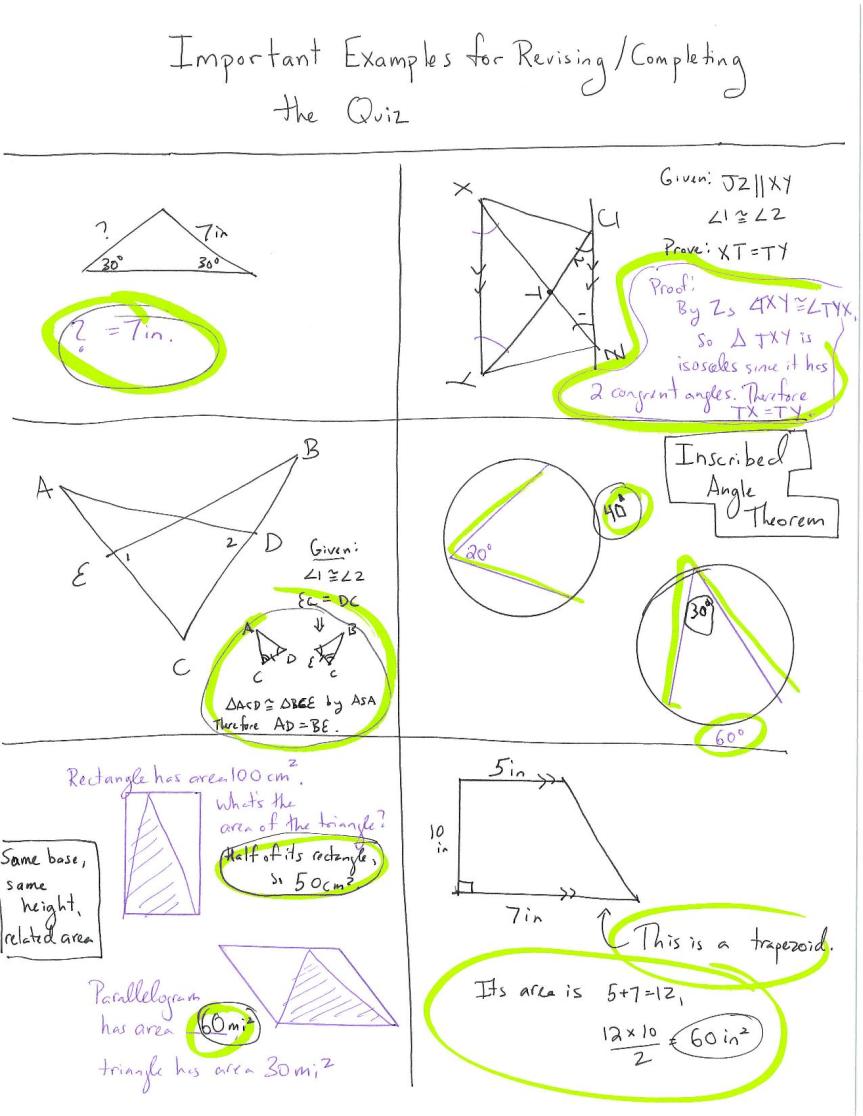 This was my first time trying this, but I thought it went well. Solid engagement, really good questions, no unproductively stuck students.

When you do something good in teaching, you never really know if it’ll work again, but I’ve got a good feeling about this one. It feels like a lot of what has already worked for me, but in a better order.

Harry Fletcher-Wood is very nice and has a lot of interesting thoughts about feedback. As such, Harry and I very nicely disagree about a pretty interesting question about feedback: how can you teach people how to give better feeedback?

The usual caveats apply: I am not a teacher teacher, but Harry is involved in teacher education, and I have no idea if I’m right on this.

In any event, Harry recently published a really cool post where he tried to synthesize a lot of the research on feedback into a decision tree:

Now, this is awesome as a synthesis. But just because something is a good description of feedback doesn’t mean that it’s useful prescriptive advice. My favorite example of this comes from Pólya’s strategies for mathematical problem solving. Alan Schoenfeld has a nice way of putting it in Learning to Think Mathematically — the strategies have descriptive, but not prescriptive validity:

In other words, just because a heuristic is a good description of practice doesn’t mean that it is an effective pedagogical tool. And that’s precisely my concern with Harry’s decision tree.

Feedback is a high-level concept that describes a TON of what happens in teaching. And any guidelines for how to give feedback effectively are also going to be high-level in a way that reminds me of Pólya’s moves like “find a simpler problem” or “draw a picture.”

And just as Pólya’s moves struggle because they aim to guide problem solving in geometry, algebra, topology, etc., all areas of math, Harry’s decision tree seems to me an attempt to guide feedback in all areas of teaching — math, history, medical school, etc.

Of course, Harry doesn’t intend for this to be the only thing guiding students, but neither did Pólya. My question is whether these generalizations themselves are helpful, beyond whatever ways that teacher educators can make them concrete and specific for teachers.

But what’s the alternative?

I don’t know yet. I can say a few things now that I couldn’t a few years ago:

And, with this post and the other one, I now have two generalizations I can make about giving feedback in math class.

First: if there’s a problem that a lot of students have trouble with, consider a reteaching/revising cycle like the one in this image:

Second: if mistakes are sprinkled across too many topics, consider something like the revision routine I described in this post.

In general, generalizations about teaching are hard to come by. But nobody teaches in general. All teaching is intensely particular. These kids. These schools. This idea.

8 thoughts on “Teaching, in General”