I’ve been thinking lately about what it means to be a number, for kids. My guess is that, for kids, something is a number if you can perform arithmetic operations with it. So, for example, when fractions are first introduced they aren’t seen as numbers, since you can’t count by them, add, subtract, multiply or divide them. Being a number involves living the life of a number, so to speak, and that life involves counting and arithmetic, mostly.

(Related: maybe measuring should be in that mix.)

I think that kids find this unconvincing, though. I think being a number has more to do with whether the actions you can perform with numbers can also be performed with this new thing.

Or maybe it’s a 50/50 proposition? And both are important? Anyway, I wanted to look into this.

I asked my 3rd Graders, who have been studying fractions, whether they thought fractions were numbers. I asked them to write a few sentences explaining their thought. (I had to work to get those sentences. A bunch of them were very unhappy about writing.)

So, are fractions numbers? 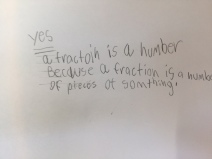 Here are some of my favorite responses:

I have no idea what that last one means either.

So, how did my hypothesis hold up?

Reading these responses leads me to revise my hypothesis. Kids decide that fractions are numbers when fractions/whole numbers co-mingle in equations and problems.

This, along with other arithmetic operations that involve both fractions and whole numbers, will help my kids increasingly see fractions as numbers.

UPDATE: I talked to my 3rd Graders about this again today. I just reminded them of the question, and then the room sort of exploded with arguments. Here are the arguments I heard.

When two parents have a kid that kid is still a person. So that’s like when you take a 1 and cut it up into thirds it’s still a number.

You can make numbers out of fractions like 1/2 + 1/2 so those have to be numbers too, because otherwise how could they make a number?

I like that these two arguments are sort of the flip sides of each other. I told my class that to me one of these sounded like “fractions are parents of numbers” and the other “fractions are children of numbers,” which a couple kids found hilarious.

One girl said that it really depended on the fraction. People talk about having half of something all the time, so half is a fraction. Other things — like 7/13 — that wouldn’t be a fraction because nobody talks about those. Later, I tried to put pressure on this position: what if I made a recipe that called for 7/13 of something? She said it really depended on what everybody did, not just me.