Six years ago I was so worried about students’ mathematical conceptions and misconceptions that I created a website to get better at identifying them. This project quickly began to question its own legitimacy. Are conceptions stable? What do we mean by “conception” or “misconception”? Are there other causes of student mistakes?

Lately, I’ve been coming to doubt a lot of the power of conceptions to explain mathematical thinking. But this is definitely not something I’m sure about, and a recent conversation with Kent and Avery made me even less sure of myself.

@KentHaines @woutgeo I've found it productive to think in terms of strategies rather than conceptions (or misconceptions).

In wondering how I might test my ideas — or make more sense to Kent and Avery — I thought of a wonderfully clear piece of research by Eric Knuth, Ana Stephens, Nicole McNeil and Martha Alibali about conceptions of equality. The researchers here argue that students don’t properly understand the equal sign, and that this poor conception is responsible for troubles they have with solving equations and algebra, in general. 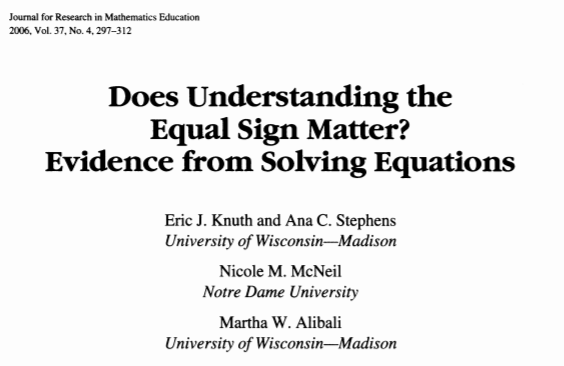 I wondered: what would happened if I read this piece through the lens of my new worries? Would I find my worries resolved? Or would they find renewed strength?

The researchers call the trouble-inducing notion of equality the “operational view.” This isn’t nearly as evocative as their other name they have for this, which they call seeing equals as a “do something signal.” This view is limiting. Much more useful for algebra is the “relational view,” the more sophisticated idea that what’s to the left and right of an equal sign must be of the same numerical value.

So, why does seeing the equal sign as a “do something signal” matter for algebra? This passage summarizes two possibilities from Kieran and Carpenter.

It’s worth digging in here. Kieran says that the misconception surrounding equality makes it difficult for kids to make sense of algebraic expressions. Why? Because it seems to students that you must do something with a variable like a. After all, if we give meaning to expressions via equations and students see equations like a + 3 = 10, then a + 3 means “do something to a and 3 to get 10.”

If students had a relational view of equality, this would be better. How? Then these students would see a + 3 = 10 as saying that “a + 3” has the same value as “10.” They would treat “a + 3” as a complex algebraic object, not as a variable with an operation.

Undoubtedly, it’s true that students would benefit from seeing a + 3 as a composite object. But it seems to me a bit like cheating to say that this has to do with seeing the equals sign as the “do something signal.” The issue isn’t so much the equals sign as a signal, the issue is that the way kids are reading a + 3 makes the ‘do something’ interpretation natural. The reason why kids read the equality as “do something” is, I think, plausibly explained by their reading of “a + 3” as “a mystery number plus 3” instead of “the composite expression a + 3,” which would indicate the more sophisticated understanding

And what of Carpenter? He says that kids with a “do something” conception should have trouble with solving 5x + 32 = 97 by subtracting 32 from both sides. “What kind of meaning can students who exhibit misconceptions about the equals sign attribute to this equation?” he asks. “Virtually all manipulations on equations require understanding that the equal sign represents a relation.”

I’m stumped as to why he says this. If you think of equality as “do something,” then there’s a perfectly fine way to understanding subtracting 32 from both sides. The equation states, if you’re of a “do something” mind, that if you multiply some number by 5 and then (do something) add 32 to it then you get 97. You should subtract 32 from both sides, then, because if you didn’t add 32 then your answer would have been 32 less.

In other words, I see no reason why “backtracking” (or “undoing the steps”) wouldn’t be available to a “do something” student. What about seeing the equals sign as “do something” would get in the way of backtracking?

As with Kieran, there is something else going on. Students often have trouble seeing equations as objects as opposed to processes. In other words, a student who sees the entire equation as describing a process (“you get 97 when you multiply some number by 5 and add 32 to it”) it’s hard to take a step back and say, OK, how would this process have gone different if you didn’t add that 32? That step back is a meta moment; it’s when you’re able to start talking about the process, and that’s a big change for kids.

But is that change all about the equal sign? I don’t think that it is. We’re putting too much into the equal sign. The conception of equality is made to stand for much bigger and more complex shifts in understanding.

(Update, 12/20: It seems to me that I might have not properly described the “do something” signal. I think they’re saying that the equal sign literally tells you to do something to a and 3. That’s why it’s impossible to solve an equation like a + 3 = 10 — it’s nonsense, or it’s a signal to combine a, 3 and 10 in some way, like 13a or something. It’s true — if kids literally think that = is a command to do something then they can’t do algebra. They also can’t do ___ + 3 = 10 or 3 + ___ = 10. I’m saying there’s a nearby conception of = that allows kids to make sense of these equations. It’s the “pick a number and then do something” conception.)

So, are these related questions?

Here is the figure showing the relationship between correctly solving an equation and relational/non-relational views on equals: 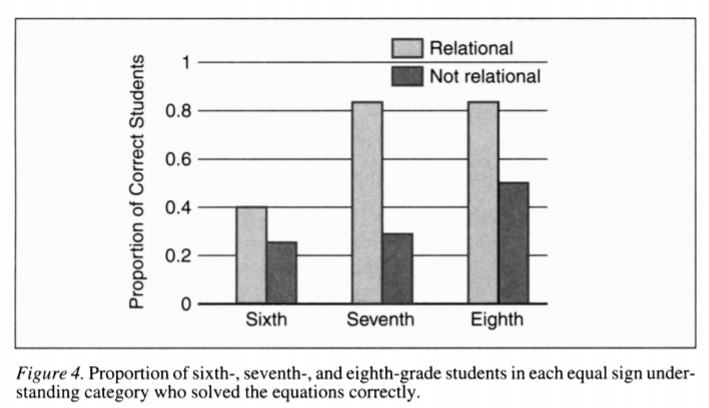 Here is the figure that shows the relationship between use of an algebraic strategy for solving the equation and relational/non-relational takes on equality: 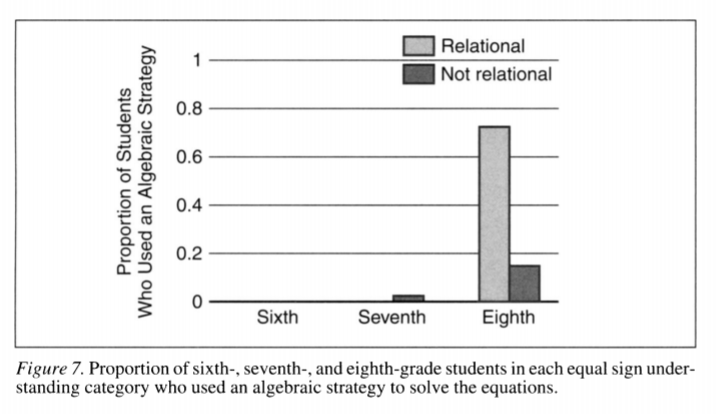 In sum, if you think about the equal sign in a shallow way then you probably weren’t solving an equation using algebra in 8th Grade. And you were less likely to correctly solve equations across all middle school grades.

(Random aside: when writing about research I always prefer the past tense “you were less likely” rather than “you are less likely.” The latter supports the idea that a particular study provides a universal truth, the former allows you to focus on the current study.)

The authors of this study take this as evidence that conceptions of the equals sign impact your ability to solve equations. “These findings suggest that understanding the equal sign is a pivotal aspect of success in solving algebraic equations.”

What confuses me is how they know the arrow points in that direction. It seems just as plausible to me that students’ ability to solve equations in productive ways drives their understanding of equality. In other words, maybe how you think about equality and how you solve equations co-develop. Why should we think that how you think about the equal-sign is a gatekeeper?

This last claim of mine — it feels like that might be going too far. But remember the terms of the discussion. The conception of equality it supposed to enable students to successfully solve equations and do algebra. Is it possible to offer students a sturdy enough conception of equality for algebra without doing algebra? I’m not sure at all.

One thing I’ve been telling Kent is that I prefer to focus on strategies rather than conceptions. The above gives a sense of where I’m coming from. The hope of the authors of this paper seems to be that if you give kids a great way to understand equality as elementary students, they’re going to have a much easier time learning algebra. The conception will be strong enough to guide future work.

It doesn’t seem like that to me. It seems to me that a conception of equality that can support algebra develops alongside a student’s grasp of algebra. In other words, there are no shortcuts and no inoculation possible in the elementary years. If you’re interested in doing work with elementary students that would support their future algebra work, I think you have to do some algebra with them.

(Project LEAP — from many people related to this article! — is doing this research work for equations. Project Z is doing this for negative integer work. It’s a promising route, I think.)

In short: if you want to improve kids’ future conceptions, you can help them by helping them come to strategies they can use and understand. You can’t take a shortcut through conceptions.

(Random aside: is there a difference between a conception and a belief? It seems to me that conceptions are types of beliefs, and that beliefs are confusing and unstable and maybe not good things to focus on in explaining human behavior. I know Lani Horn has written about this.)

Here are some questions I’m left with: