On Friday morning, I asked my 4th Graders to think about this question in their heads:

I was very curious as to their responses. It had been a few weeks since we had worked on an incredibly similar problem — Which field has a greater area, a 45 by 20 or a 40 by 25? — and I was curious if students would make a connection to a problem we had spent a full class period studying. (I guessed they wouldn’t.)

When working on the “Greater Area” problem, nearly all my students had thought that the two fields had equal area. They reasoned that 45 by 20 and 40 by 25 fields would have equal area since a “5” could be taken from the 45 and moved to the 20. It was hard to convince students that the areas were not equal.

Following up on that lesson, our class had focused on mental strategies for multiplication. Our main focus was on using multiples of ten to help with computation, a strategy my students called “Stuff.” (My fault for asking them what we should call it.)

Would kids approach my new “Which is Greater” problem differently after all these experiences?

After giving students time to think mentally, I handed out index cards and asked them to write down their mental-train-of-thought on the card. I told them that I didn’t want them to rethink it in writing — I wanted a recording of their mental approaches. I knew that these were difficult instructions to follow, but I wanted to preserve their original lines of thought as much as possible.

I was surprised — and a bit sad — to notice that several students thought that 30 x 15 and 25 x 20 were going to be equal products. Though the idea is incorrect, S displays it beautifully: 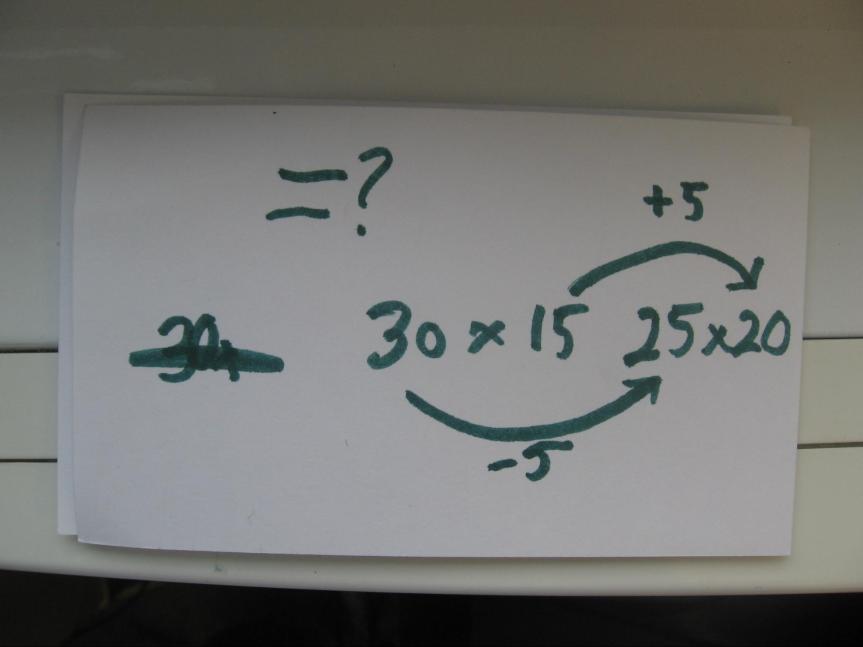 N, I think, is trying to get at the same idea as S, though she has an entirely different observation to make: 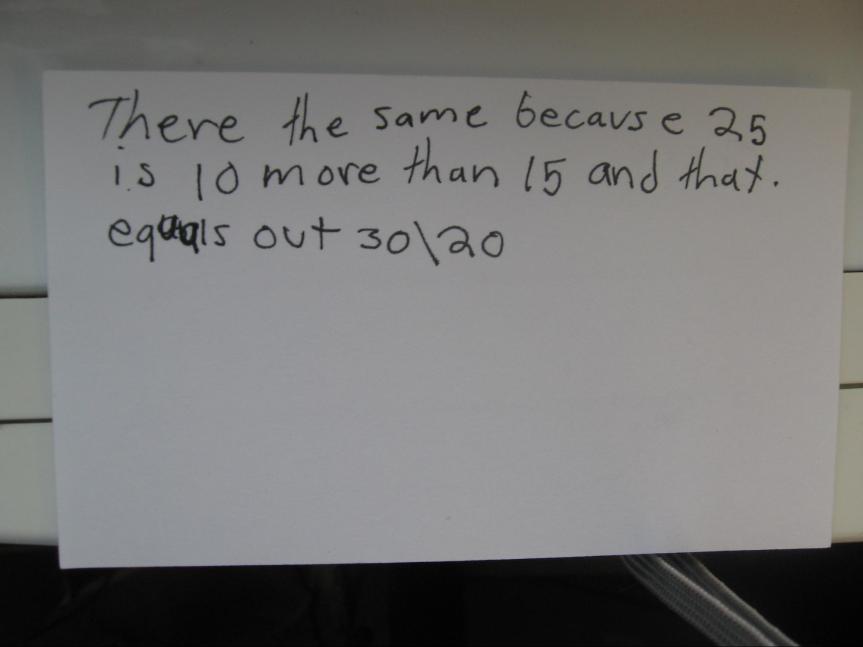 It seemed these students didn’t remember what we had spent a full class period working on just two weeks before.

One student made a nice connection to the “Greater Area” problem. W roughly sketched each product as a rectangle, and told me that it looked to him like the 20 x 25 rectangle was bigger. In our previous work, I had asked my class to think about whether it was the thinner or the “squarer” field that held more area. It seemed to me that W was drawing on his memory that, perimeter being equal, “squarer” fit more area. 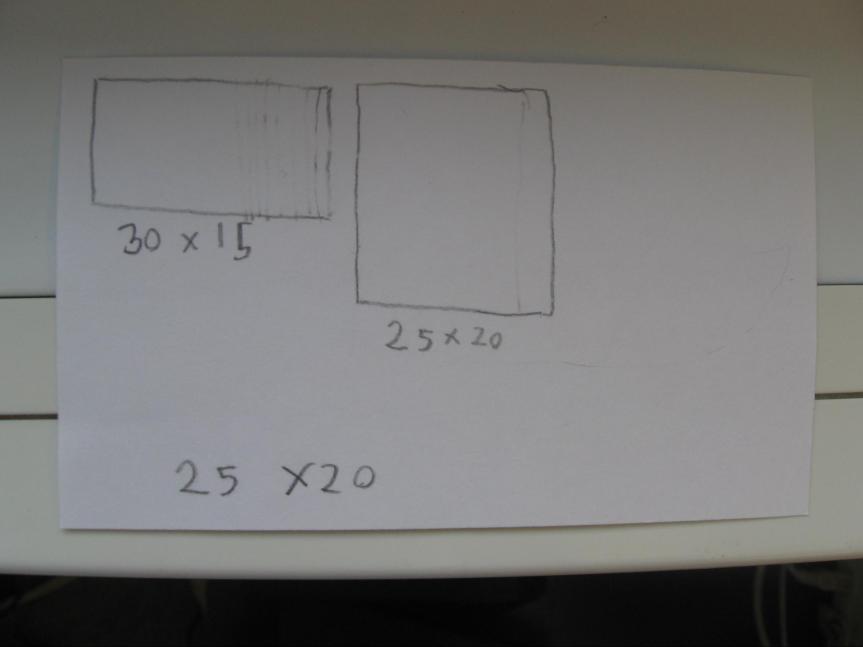 Though my students weren’t making connections to the old problem, it made me happy to see that many of my students used multiples of ten to help their computations. Nobody had done that when we did this problem a few weeks before.

One student skip-counted instead of using multiples of ten, though. That made me a bit nervous about her progress. (Maybe I shouldn’t worry. After all, she didn’t use skip-counting or anything to tackle the 40 x 25 version of this problem a few weeks prior.)

I was interested in the variety of “first moves” involving multiples of ten that students made along the way towards a final answer: 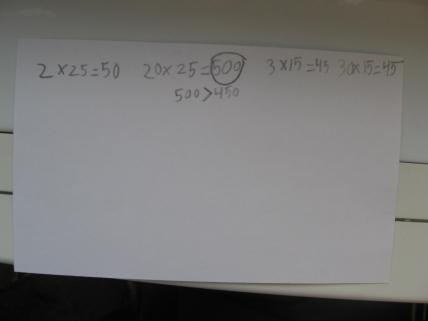 Using multiples of ten is a procedure that students can decide to do in a number of different ways.

There were two other approaches that I found especially interesting. The first was Ella’s. She started with 10 x 20, but wrote that 10 x 20 = 201. I have no idea where this came from, though I understand why she added 5 at the end (to get to 25, I assume). 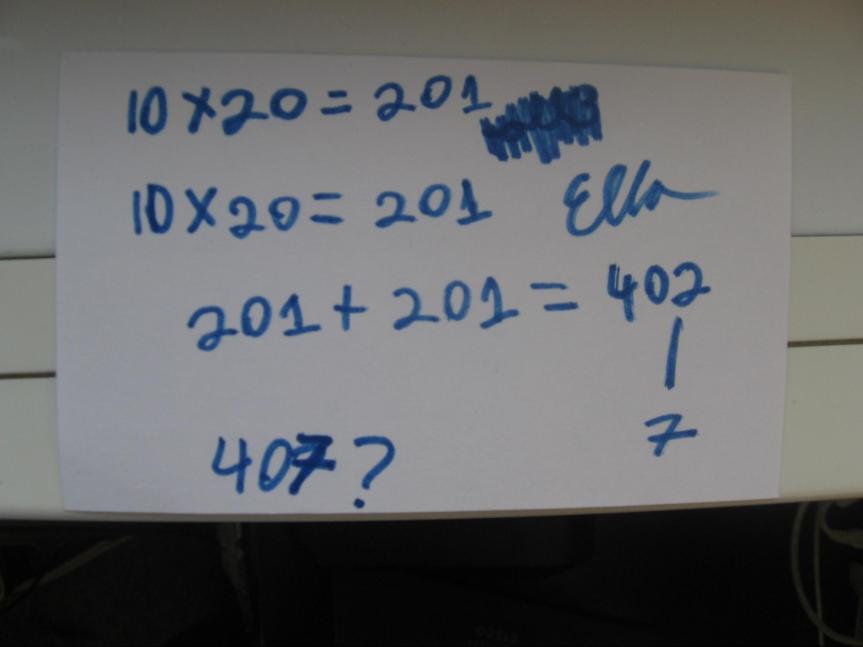 Ella’s work shows how tricky it is to keep track the differences betwee multiplication and addition. Adding 5 back at the end is a typical addition strategy, and even though she has a lot of strong work on her notecard, that’s the sort of mistake that I’d like to teach her to avoid.

The other was D’s. It seems that D attempted to use the standard algorithm, but she concludes that 25 x 20 and 30 x 15 are equal on its basis:

The truth is that she didn’t actually make any sort of error with the execution of the standard algorithm. But where did she get 500 from? (Not by adding 150 and 300, I don’t think.) My best guess is that, after performing the standard algorithm, some other line of thought occurred to her that made her think that the two products were equal, even though the rest of her mathematical work suggests the opposite.

The main difference between the students who got correct vs. incorrect answers was whether they drew on the structure of addition or the structure of multiplication in their thinking. Those who drew on addition ended up deciding that 5 can be moved between factors in 30 x 15 to produce an equivalent product, 25 x 20. This is true for addition: 30 + 15 = 25 + 20. Students who drew on multiplication drew on group-structure, multiples of 10 and doublings in their work. And, as E shows, some students used both structures at once, leading to mixed results. (E realized that the products were not equal, but she miscalculated them.)

This problem is coming after students have already been prompted fairly heavily to think about multiplication using multiples of ten. It was great to see that my students are using it, and the variety of ways in which they did their work makes me think that they are making the strategy their own.

At the same time, it’s fairly remarkable to me how many students didn’t make the connection to a very similar problem they worked on just a few weeks ago. I often forget just how different my memory is to that of my students’. For me, that class was a landmark. For them, it was probably just another class. After working on the “Greater Area” problem a few weeks ago, they walked right out of my class and into someone else’s lesson.

For kids, there are always many things happening at school. A teacher can’t count on just one lesson sticking — we need to connect several different experiences to have a shot of building some strong knowledge.

5 thoughts on “Forgetting and Learning”