For the last month or so since I read this article, I’ve been unable to shake the idea of “mathematical worlds”:

Rather than describing the challenges of integer learning in terms of a transition from positive to negative numbers, we have arrived at a different perspective: We view students as inhabiting distinct mathematical worlds consisting of particular types of numbers…Proficient students and adults may also inhabit multiple mathematical worlds from moment to moment.

This metaphor completely fits my experience with children. There is often doubt about what “world” we’re operating in. Are fractions allowed? Are we using i right now, or does x^2 = -9 have no solutions?

(The other relevant metaphor is of a game, as in “I didn’t realize fractions were allowed.” Is there a connection between the metaphors or world and of game?)

One thing this metaphor helped me realize is that my students might bring up negatives in my class more often if I simply gave them permission to. How do you give permission? I decided to bring them up right away with my 4th Graders. (I culled the questions from here.)

I handed out a piece of paper to each student. I asked them to work completely on their own. The first question was 9 – 10 = __. Here were the responses:

The next question led to protests, though: 6 + __ = 4. Some protests, some talk of -2. (Wait, are we allowed to use negatives?) I collected their papers and, since kids seemed to have what to say about this, I asked volunteers to share their thinking.

First went E, who explained that since 6 – 2 = 4, this had to be -2. I wasn’t sure exactly what she meant by this, but then H objected to this whole thing in an incredibly helpful way:

Me: I have no idea what you mean so I’m going to offer a belabored explanation of how we’re not adding “minus 2,” rather we’re adding “negative 2.”

Me: Wait, I think I understand what you’re trying to say. You’re saying it’s like if we said 3 times divide 2, like, what would that mean?

But then a bunch of other kids jumped in. They were totally able to make sense of “6 plus minus 2.” They said you were adding a minusing of 2. This is subtly different than anything I’d ever before understood kids to say. They weren’t treating “-2” as a point on the number line or even as a single number at all. They were making sense of -2, in this context, as an action. The action of subtracting 2.

All the while this was making me nervous. Middle and high school students have trouble distinguishing between the three slightly different ways in which we use the minus sign in mathematics. (See: “High School Students’ Conceptions of the Minus Sign”) 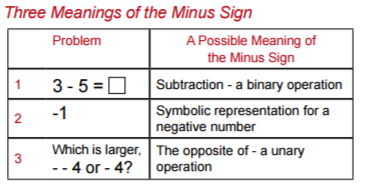 The more I thought about it, though, the more confident I became that this was an incredibly productive way to start thinking about adding a negative. Kids who think about 6 + -2 as “adding a minus 2” are already along the road towards thinking of the process of subtracting as an object (a subtracting). There is more work for such a thinker to do — they have to come to think of this subtracting of 2 as the sort of thing that you can operate on. (What does it mean to add 3 to a minusing of 2, as in -2 + 3?) But there is a clear conceptual path for these students to take.

We’re going to keep this up in 4th Grade. Actually, this all happened yesterday, and today kids ended up digging into the number line, its mirror-like symmetry and the “realm of the negatives” (which J connected to Minecraft and Portal, god save the children.)

Kids seem to be having fun exploring this realm, and they’re doing good math. Why not give kids permission to enter this world?