How do you represent a proof, if you want students to think about the proof? I’ve been writing activities to support proof writing over the past two weeks, and it’s a question that I’ve found difficult to answer. I want to share where I’ve started and where I’ve ended up in my work.

The first proof-related activity I wrote was Overlapping Triangles.

I still like the idea behind this activity, but it focuses attention on an itsy-bitsy subcomponent of writing proofs. There’s a type of problem that this helps with, but we have to zoom out a bit to see actual reasoning.

Next, I made Sequences of Transformations.

Mobiles and Equations manages to avoid representing the reasoning itself in a similar way. It’s about connecting puzzles with equations that represent solutions of those puzzles. 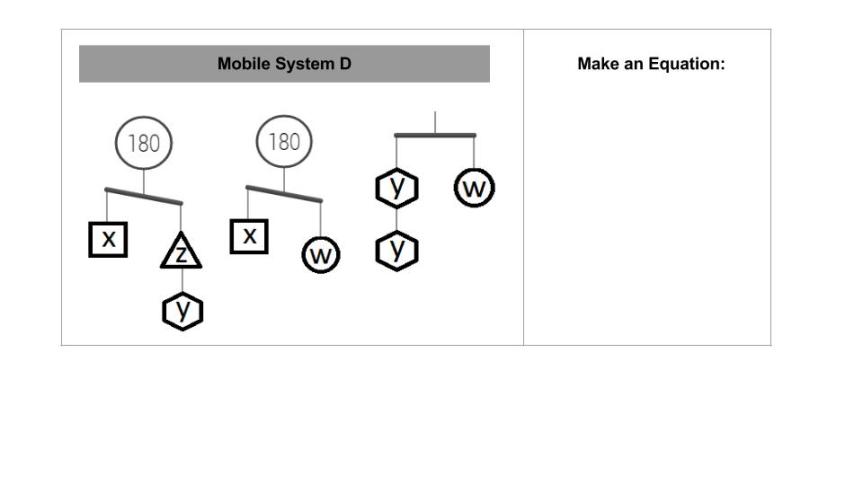 Once again, I’ve avoided representing thinking by asking students to connect a scenario with its final state. I’m tiptoeing around the difficulty of representing a proof in two meaningfully different ways.

What’s next? Realizing that I was skirting the issue, I decided to include congruence proofs in the task itself. This line of thinking led to Givens and Diagrams, where I ask students to connect (you guessed it) givens and diagrams.

Another failure to capture proof itself. I kept trying.

Givens and Proofs gets closer, right?

At least there are proofs being represented here. But I was starting to realize the problem. If you try to connect a representation of a proof with anything that is not a representation of a proof, you end up removing the proof from the task. Despite all the arrows and flowchartiness of Givens and Proofs, it really comes down to figuring out which given connects to the line below it. You could excuse yourself from thinking about the logic of the entire proof entirely and simply focus on what each set of givens entails.

At this point (yesterday) I thought, OK, so what if I just showed a flowchart proof and that same proof represented in some other way. The issue is that it then becomes possible to make the connection using superficial features like “does this proof end with congruent triangles” or “is M given in the midpoint in both this flowchart and this paragraph proof” or whatever.

Then I thought, OK, so what if I split a two-column proof in half? And what if I made it three proofs that all use the same diagram? That led to Connecting Statements with Reasons.

One thing I realized then was that if you’re representing even half of a whole proof, things get very wordy and overwhelming quite quickly. To avoid that, I would be careful to start by showing students just one of these representations at a time. I’d encourage you to figure out as much as you can about these sets of reasons before attempting to do any other thinking.

After you’ve studied the reasons fairly thoroughly, you might then study these sequences of statements in a similar way.

And, after all this, have we finally gotten to thinking about proofs themselves? I think we have — both the sequence of statements and the sequence of reasons are representations of a line of argument — but the task doesn’t feel great because it’s just so wordy.

At the end of today, I made another activity, this time playing with representing a proof in a schematic summary. Here is Connecting Summaries to Proofs: 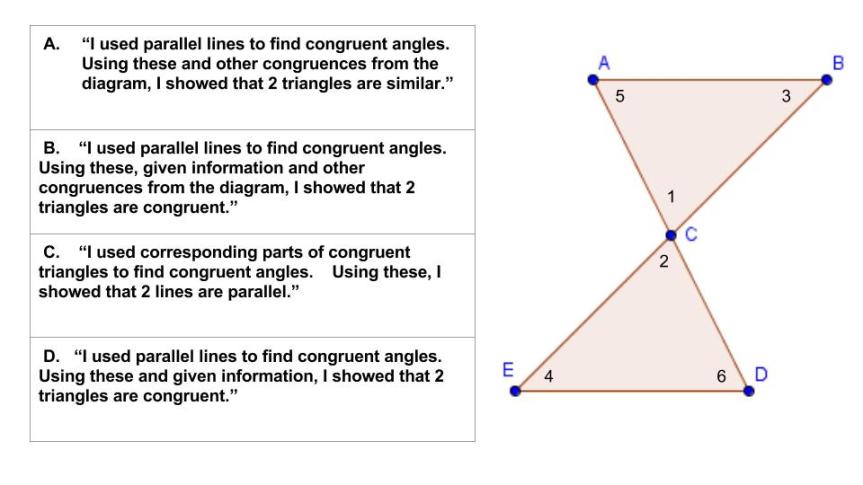 What I like about this last one is that the proof summaries draw attention to the structure of the argument, and the student is asked to chunk the flowcharts into that helpful structure. I think this is the most promising activity I have for actually representing the argument itself in two meaningfully different ways, and it manages to use fewer symbols than the Statements/Reasons attempt.

I have a last day of activity design tomorrow before I have to walk away from this project for a bit. How do you represent a proof so that you draw attention to the proof? The best answer I have so far is to ask students to connect a representation of a proof to a simplified representation of the whole proof. The key challenge is to make sure that this simplification is actually still a proof as opposed to a component of the argument (like givens or a diagram).