I said [Three Act problems] are most valuable to me before learning skills, or rather as the motivation for learning skills. I don’t expect that students will just figure everything out on their own, though. Act one helps generate the need for the tools I can offer them here in act two.

I’ve been thinking about it, and I think I disagree with Dan’s take here. I think there are important differences between providing instruction during, before or after a tough mathematical experience, and that instruction during a problem is often bound to be lost in the flood of ideas that a mind is awash in.

Here’s where I’m coming from. Over the past few class periods, my 4th Graders have been working on a lovely little activity. We watched a short video showing Andrew papering his cabinet with sticky notes. How many sticky notes would it take to cover the entire thing? 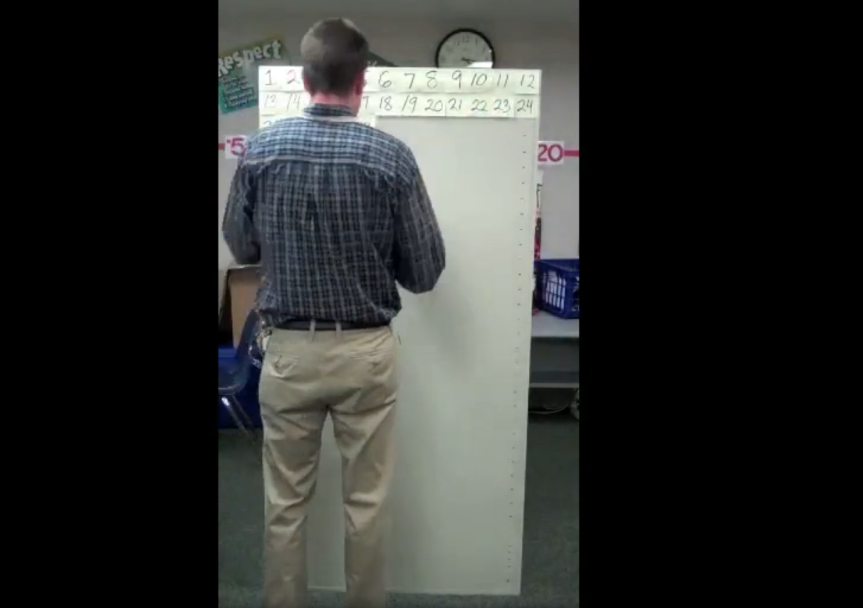 I showed this video, and was disappointed by the tepid response from my students. Then I asked my students to estimate the number of stickies it would take to cover the cabinet. More blahs. And then I clarified that we’re trying to figure out how many stickies would cover the entire cabinet, and my kids exploded with ideas and excitement: “Wait, can you give us time to figure this out?”

While walking around, I noticed some kids getting lost in their calculations. Lots of great ideas, but constantly losing the thread.

Other kids, though, used diagrams to preserve their line of thought. These kids, even if they were less computationally sophisticated than other students in class, were finding relatively more success in the problem. 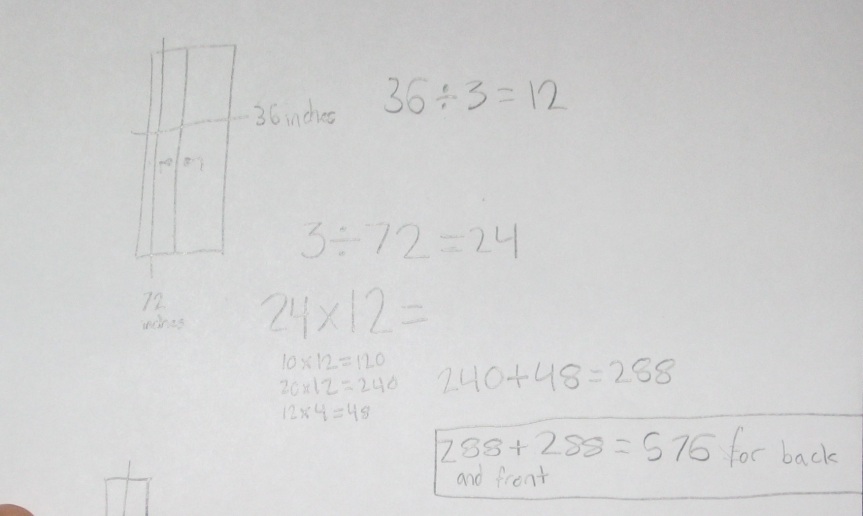 When I noticed this, I realized that this sort of diagramming was an important mathematical idea that I should make explicit to everyone. When pairs called me over to help them make sense of their confusing calculations, I made the suggestion: here’s a diagram, here’s how you can use it, this could help with where you’re stuck.

No dice, so I decided to pause class and say it to everyone: hey all! I noticed that the tricky thing isn’t just the calculations, but trying to keep track of what you’ve figured out and what you still need to work on. Diagrams can help, here’s a diagram, here’s how you can use it, you might try this.

As I walked around some more, I poked around to see if pairs had adopted my suggestion. No dice, still.

Bell rings, kids hand in their work, that’s that for the day.

The next day, I start class by saying, “I noticed a lot of us got stuck on the problem yesterday. We’re going to keep on working today, but here’s something that might help: here’s a diagram, etc.”

What happened? Hard to know, of course, but here’s what I’m thinking: the first time around, my kids had a million mental distractions. Some were wondering if their calculations were right. Others were just trying to get a grip on a plan of attack for the problem. Others were trying to remember where on their page they had written their current tally of the stickies on the front and back.

In other words, these kids had a lot to think about during this problem, and they weren’t really able to dedicate the brain space needed to understand a new and unfamiliar strategy.

This is also how I make sense of something I’ve noticed in my Algebra 1 class. I haven’t yet given these kids activities that explicitly address the “cover-up” method for solving equations, but I keep trying to bring it up when kids ask me for help with equations in class. The thing is, it never seems to stick.

It seems to me that if we think “just-in-time” instruction works particularly well, my kids should be able to hold onto this method a bit better than they currently do. After all, they have a clearly felt need for some new bit of math (they called me over, right?) and they are getting the instruction during their felt moment of need. Super-duper effective setting for instruction, right?

But then it doesn’t stick. And I think it’s for the same reason that my 4th Graders didn’t take up the “draw a picture” suggestion: they’re too mentally distracted to really focus on the new idea and properly learn it. After all, learning a new idea in all its proper generality can be a pretty heady bit of work. When my kids call me over for help with their equations, they’re potentially thinking about many other mathematical things — where am I in the problem? did I make a mistake by subtracting? what’s 4 divided by 6? — and often can’t focus on the strategy itself.

This, then, is a sort of dissent against the Three Act model of instruction. New mathematical ideas are not best introduced in the middle of a problem if they’re going to get the mental real estate they deserve. Students are often productively distracted by a difficult problem, and unable to focus on the strategy or tool at hand.

The thing that works better, in my experience, is following up a tough experience with a new idea or tool. This seems to me closer to ideal. The students get to spend of time struggling with a tough problem, which I think is valuable all on its own; they thoroughly understand the problem context, since they spent careful time on it; when I introduce a new idea after this experience, they are in a strong position to focus on this tricky new idea itself rather than the million other things it takes to comprehend this new tool.

This report is based upon work supported by the National Science Foundation under REC Grant 0196238.

OK fine, but he also writes:

Instruction that allows students to generate imperfect solutions can be effective for future learning.

But instruction that comes in the heat of the moment is not looking towards the future — it’s coming during the chaotic present, a time when the student’s mind is being bombarded with many tricky ideas that are specific to a particular problem context. I don’t think that’s a great time to introduce a new idea, but tomorrow might be.

26 thoughts on “Dissent of the Day”